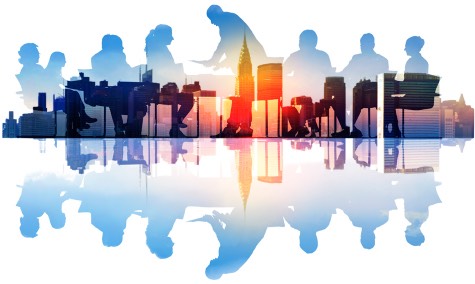 The EMBAC Board of Trustees sets council goals and charts the strategies for council initiatives. The membership elects candidates for open trustee positions each year. The board includes 11 academic voting members and a corporate member representative as an ex-officio. Each board member assumes a role during the term, such as leading communications, research, conference, and professional development or serving as treasurer.
2022-2023 Board of Trustees

When Colette Feldges interviewed for her first job in Executive MBA education, she brought a more non-traditional background to the conversation.

By then, Feldges had moved into sales and marketing from computer programming when she realized that she enjoyed working more with people than machines. In her spare time, she was organizing events as a volunteer. While the route to EMBA seemed circuitous, it was a perfect landing place for her.

Her EMBA journey began as associate director, Executive MBA Students Affairs, at Washington University’s Olin Business School. It didn’t take long before she received a promotion to director of Executive MBA Student Affairs. She led a team that delivered programs in St. Louis and Kansas City.  In her role, she managed the student experience, designed ways to enhance alumni relationships, and oversaw class scheduling, orientation, academic affairs, and domestic and international residencies.

Her responsibilities not only kept her in close contact with students but also resulted in international travel to China. Olin had just entered into partnership with Fudan University to start the Washington University-Fudan University Executive MBA Program in Shanghai, China, and Feldges collaborated with the managing director in Shanghai on its successful launch and continued growth.

Both a memorable project and a key achievement, the Washington University-Fudan University project represented yet another milestone that helped cement her belief that she landed in the right industry for her. For Feldges, the most compelling reasons come from her contact with EMBA students.

“I came to love the EMBA student population,” says Feldges, director of the Executive MBA Program at the Evanston campus of Northwestern University’s Kellogg School of Management, and EMBAC board member. “What drew me to EMBA and keeps me in EMBA is the respect I have for students who take this program on at such a pivotal time in their lives – both personally and professionally.”

In 2013, Feldges took on a new challenge as the associate director of Executive MBA Student Affairs for Kellogg’s Miami and Evanston campuses. In 2016, she become director of Kellogg’s Evanston-based EMBA Program.

As a leader who joined EMBA with no higher ed experience, Feldges takes care to look for the unusual in hiring and values building strong teams and supportive, open cultures. Throughout the years, she has seen changes in the program, many of which relate to understanding the evolving needs of students and their organizations.

“The focus years ago was core skills, and while they remain important, business education has evolved,” says Feldges. More than a decade ago, soft skills, previously labeled as fluffy, started to gain traction as critical additions. That switch also accompanied a clear pivot to leadership development.

“Students want to learn more about effective, ‘values-based’ leadership," she says. “The technical core courses are now table stakes. Everyone will have them, but who you truly are as a human being – how you inspire, motivate, and build a strong culture – has become a true differentiator.”

One student approached Feldges with feedback that confirmed the value of leadership development. “The student said to me, ‘I thought I was a pretty effective leader, but what I now see is that my overbearing style made me demanding and difficult.  My staff did what I said because they were afraid of me – not because I was a great leader.’ ”

That realization caused the student to take a different path and build trust and loyalty, and the program offered a safe environment to try new approaches. The story reflects the kind of experience that Feldges wants students to have.

“When they walk in the door, we don’t care what they know,” she says. “We know they are bright, accomplished, and passed the admissions criteria, but what we want them to do is embrace what they don’t know – their gaps, what they are afraid of, what keeps them up at night,” she says. When the program takes them out of their comfort zone, and they’re willing to be vulnerable, it makes growth possible.

Because of the increase in self-funded students throughout the years, students are more vested in their programs and are more interested in career opportunities.

“I think students relish their time in EMBA and have higher expectations than they did 20 years ago. When they are spending their own money, they are going to demand much more, and this program has to be worth it to them. They deeply care about the value proposition and true growth – and they are ALL in.”

As one important constant resource for EMBA Programs, EMBAC plays a key role in strengthening the industry, says Feldges. She attended her first conference in Baltimore 16 years ago and participated in the EMBA Toolkit preconference session.

“It was incredibly reflective, and I can’t tell you how much I got out of that conference. Everyone was trying to help everyone else. It created a powerful network and great mentors for me and was simply life changing.”

With the pandemic ushering in an era of remote learning, programs now need to decide how best to apply the technology lessons and advancements of the recent past. EMBAC will help programs navigate the new world, and Feldges is eager to help the organization that brings industry members together.

“I have received so much more from this organization,” she says. “It is now time for me to give back. I am a big believer in paying it forward whenever I can.”

“I came to love the student population. That’s what drew me to EMBA and keeps me in EMBA. I have such respect for our students. They immerse themselves in this experience and sacrifice so much to be in the program. I don’t take that lightly. It’s a privilege to do this work.”

Dates to be determined